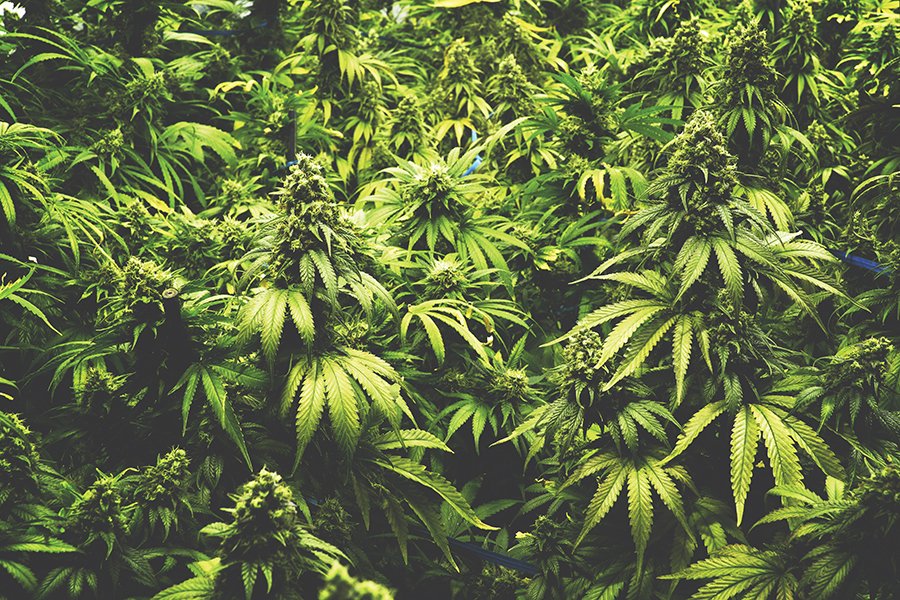 Most of Illinois’ recreational marijuana dispensaries are bunched up near the Wisconsin state border. This could be chalked up to the proximity to Chicago, but dispensaries like the Mapleglen Care Center in Rockford, Ill., a 20-minute drive from Wisconsin, or even the Sunnyside dispensary in South Beloit, Ill., clearly exist to take advantage of Wisconsinites’ dollars.

When the South Beloit dispensary opened, it was the largest recreational marijuana store in the state, and the strategic location chosen for such a massive venture was a tiny town with less than 8,000 residents. One might think that it was aiming to attract Wisconsin residents: The store is just 1,000 feet south of the state border, a straight shot from Madison through the I-39/90 interstate. According to South Beloit Mayor Ted Rehl, the dispensary is expected to generate sales tax revenue for the town of up to $700,000 per year after seven years—as long as Wisconsin doesn’t legalize marijuana, Rehl added. His town’s budget now relies on the failure of Wisconsin to enact progressive policies in order to divert revenue away from the Badger State.

By refusing reform and allowing dollars to pour out of the state into Illinois and Michigan, both of which legalized adult-use marijuana and are a short drive away, Wisconsin is routinely losing millions of dollars. In September 2020 alone, the Illinois state government reported nearly $18 million in legal marijuana sales to out-of-state customers. Since the beginning of the year, Illinois received more than $100 million from out-of-state marijuana tourists.

Illinois is not alone in that respect: In Michigan, half-a-dozen marijuana dispensaries have cropped up—with several more in the process of opening—in the Upper Peninsula alone. The Upper Peninsula is home to barely 3% of Michigan’s population, but it is a stone’s throw away from the northern Wisconsin border. Dispensaries like Rize U.P. in Iron Mountain, Mich., are located virtually on the state border. The message is clear: “Come on in for legal weed since your state refuses to legalize it.”

To be clear, it is a federal crime to bring marijuana over state borders, since cannabis is still federally banned. Which means that, unless we assume that literally millions of Wisconsinites committed federal crimes to legally buy marijuana in a neighboring state then illegally bring it home, we have to assume that countless people visit legal marijuana states and stay there long enough to enjoy the experience—which means paying for lodging, food and activities on top of the marijuana products themselves. As such, a new category of economic actors appears: marijuana tourists.

Marijuana tourism is not a new phenomenon; Amsterdam coffeeshops have been attracting millions of visitors to the Netherlands every year since legal consumption of marijuana became widespread. It is a billion-dollar industry that has been sustaining more than 10% of all jobs in Amsterdam. Within the United States, ever since Colorado and Washington legalized adult-use marijuana, inter-state marijuana tourism has been booming.

Marijuana tourists have two main options for lodging. A Wisconsin resident spending a week in Illinois, for instance, can either stay in a private property or in a hotel—but they must keep in mind that marijuana being legal in the eyes of state government does not mean that it is accepted by all private businesses. While eating edibles is discrete and can be done anywhere, smoking marijuana in public is often not allowed, meaning that tourists will need a private space to consume whatever they buy in local dispensaries.

“Only private rentals are fully 420-friendly, and they advertise that way,” explains Eric Pine, founder of Green Tripz, a marijuana travel guide that supplies information about weed-friendly hotels, but also adult-use dispensaries and activities—where to stay, buy and enjoy legal pot. Even if a hotel in a legal state does not explicitly allow marijuana, they are likely to tolerate it and look the other way if they have accommodations for cigarette smokers. “Bigger hotels are not really going to advertise that they are weed-friendly. We point people towards the ones that have private balconies in the rooms and smoking rooms for guests. Getting a room with a balcony is the way to go.”

“While it’s not a legal issue, the last thing you want is to be stuck in a 100% non-smoking hotel, in a room with no private balcony. Having to go all the way downstairs and outside to find a hidden smoking spot (and break the law by smoking in public) sure takes the fun and enjoyment out of being in a state with legal weed!” Green Tripz clarifies.

Green Tripz identifies more than 50 hotels in Illinois and 25 in Michigan that explicitly allow smoking—including large chains like Marriott International and Radisson Blu. Although these larger hotels have refused to comment for this story, they have confirmed that they treat smoking marijuana like smoking tobacco; but it must be consumed in a specific space or in a manner that leaves no scent and is respectful to other guests.

“We are seeing hotels in recreational legal states that have not only smoking areas but specific areas for cannabis consumption. There are some that provide vaporizers to let people smoke on the deck or even inside their rooms,” testifies Sean Roby, founder of Bud and Breakfast, a marijuana-friendly AirBnB-like service. Through this service, he gets a glimpse of the more dedicated marijuana tourists, the sort who are willing to pay extra for private lodging and marijuana-friendly accommodations.

“Bud and Breakfast has more than 1,000 hosts, and we get dozens of bookings per day, even with COVID. Our average booking is three nights, and our average price per night is $290; one booking is close to $900. Before COVID, we were tripling our revenue every year, and we’re forecasted for a U-shaped recovery next year,” Roby explains. “We are not really getting the budget travelers. Generally, we get people who are specifically traveling to learn and engage with the cannabis industry, they are not usually worried about funds. They are spending close to $900 per booking on average; when they get there, a lot of them want to experience everything there is.”

Naturally, marijuana tourists do not remain cooped up in their hotel room or rental property—although quarantine put a damper on in-person activities for a time—and they do what all tourists do, spending money in the local economy. “It’s akin to wine tourism: You go somewhere to experience activities with a host or a guide who has experience in cannabis,” says Sean Roby. “They want a top cannabis chef who knows how to microdose meals, they want a CBD-infused massage therapy, they want tours and music and activities and education. In Napa Valley, we have a zipline over a cannabis field. We have sushi and joint rolling classes. We have wine and cannabis pairing… It’s not that taboo anymore; it’s just something that many people are interested in.”

A large portion of marijuana tourists is made up of enthusiasts looking to experience recreational pot, but there are other cohorts, as well. Wherever it develops, the legal cannabis industry sprouts indoor and outdoor activities, locations to visit, eateries to enjoy and products to purchase. This, in turn, leads to a significant number of intra-state movement from people seeking to experience everything that their own state has to offer, creating influxes of money towards smaller communities.

Additionally, there are numerous medical marijuana tourists. “Up to 15% or 20% of our activity is based on medical tourism,” Sean Roby reveals. “If a loved one or yourself is suffering and you know you can go to a neighboring state to get therapy, you are not going to think twice. For instance, a child from Alabama with an autoimmune disease; their parents might bring them to Colorado to get CBD therapy without looking over their shoulder, in a safe and legal environment.”

Until Wisconsin chooses to legalize marijuana, marijuana tourists will keep pouring out of our state and into our more progressive neighbors, bringing their money with them. And until the state allows medical marijuana, Wisconsin families will have no choice but to seek therapy away from home.